Day 1: Out of Nairobi
You will meet and greet our representative at the airport to start the 7 Days Masai Mara Wildlife Safari, where you shall be briefed about the safari trip.

Afternoon you will bring the evening to a close with a game drive in this famous reserve. Dinner and overnight at the camp.

Day 2: Masai Mara
After breakfast, you leave the camp with a packed lunch for full-day game viewing.
The Masai Mara triangle is the land of African legends and icons of Africa; Lions are abundant throughout the Masai Mara triangle, as are the African elephants, Rothschilds giraffes, and a variety of Antelope species and zebra. 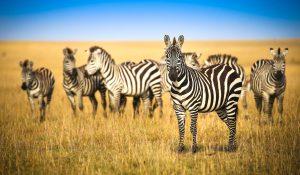 Cheetah and leopard are also regularly seen and, less commonly, rhinoceros, black and southern white. The ultimate annual wildebeest migration, one of nature’s few remaining wildlife spectacles, occurs in the Masai Mara triangle from July to September, where two million animals and their predators are on the move.

Birds appear in Masai Mara, small cats and reptiles. The vibrant, rich cultural Masai people are encountered occasionally as the young warriors crisscross the plains as they herd their livestock. Dinner and overnight at the camp.

Day 3: Transfer to Nakuru
Depart for Lake Nakuru National Park; after your breakfast, the journey arrives in time for lunch. This shallow soda lake has been famous for its flamingos but has also retained its reputation as an ornithologist’s delight, with more than 400 species of bird found here. You may get out of the vehicle at the lakeshore to look at the birds.

The nearby cliffs offer sightings of baboons, birds of prey, scurrying hyraxes, and fantastic park views. The national park covers 180 sq km and is home to warthogs, waterbuck, buffaloes, reedbucks, the occasional leopard, and white and black rhinos introduced to the park some years ago. Dinner and overnight at Genevieve Hotel.

Set in rolling savannah scenery, it is dwarfed by the presence of the pink-tinged, snow-capped peak of Mount Kilimanjaro, which, at 5,896 meters, is the highest free-standing mountain in the world.

There are also over 400 species of birds, all manner of reptilian flora and fauna and some of the most soul-searing views in Africa.
Enjoy an evening game drive. Dinner and overnight at Kimana camp.

Day 5: Amboseli
Another exciting day in Amboseli National Park, we recommend that you get up early morning, where one can experience excellent game viewing & an unprecedented view of the snowcapped Mount Kilimanjaro. Then, return to your camp for breakfast.

You may opt for an additional game drive after breakfast to visit the swamp with its magnificent wildlife all day long or relax at your lodge and take in the African wilderness. Afternoon game drives in anticipation of seeing the “BIG FIVE”.
.Dinner and overnight at Kimana Camp.

Other notable features include Mzima Springs, a water source for Mombasa Town, Shetani Lava Flow and Ash cones, which is an example of a recent volcanic eruption. The Movie Ghost and the Darkness was shot here.
Dinner and overnight at Rhino Valley lodge

Day 7: Tsavo West National Park – Watamu
An early morning ‘Spice’ game drive permits further exploration of this great Park. The Park has many birds estimated to be over 500 species. After breakfast, depart for Watamu. Drop off at your hotel.